We are called to a radical obedience 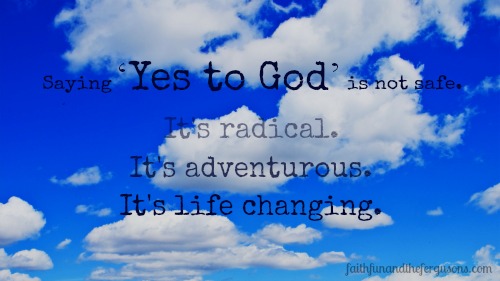 I’m looking at Joshua 5, and thinking about the way we live before God. And reading this passage, and thinking that thought, there’s no doubt but that we’re called to a radical obedience.

Radical to the point of scary.

Radical to the point of blessed.

The story at Joshua 5 is poised in the still moment before the eve of battle. They have left the wilderness behind, crossed the river and entered the land. And now Jericho has to be taken. But first things first….

The chapter has three sections, and each section tells us something important about the obedience to which we’re summoned. The first is this:

Be prepared to be marked by your obedience.

Now the “mark” of Israel’s obedience had been circumcision, back in the day. It had shown that the people of Israel were different from other nations. But no one had been circumcised during the long years of wilderness wanderings. And now Joshua receives the summons, “Make flint knives and circumcise the Israelites again.” (5:2)

It’s important to note that it was always an outward sign of an inward condition. There are several important references to that truth.

In Deuteronomy 10:1:6,  “Circumcise your hearts, therefore, and do not be stiff-necked any longer.”

In Deuteronomy 30:6,  “The Lord your God will circumcise your hearts and the hearts of your descendants, so that you may love him with all your heart and with all your soul, and live.”

In Jeremiah 4:4, “Circumcise yourselves to the Lord, circumcise your hearts, you people of Judah and inhabitants of Jerusalem, or my wrath will flare up and burn like fire because of the evil you have done – burn with no one to quench it.”

God is not insisting on an outward ritual as such, but summoning a people to an inward obedience. And when God circumcises your heart, you are marked just as surely as when the flint knives came out! You’re no longer stiff-necked, or proud, or self-important, (as in Deut 10:16), but committed to your Lord. He is centre-stage now, and not you.

And it marks you with grace (as in Jer 4:4), for you are no longer under the “wrath” of those outside covenant.

Paul said “I bear in my body the marks of the Lord Jesus” (Gal 6:6). Now I’m sure he meant physical marks: the marks of the torture and whippings that he had undergone. But these outward marks were just a sign of an inward obedience.

Radical to the point of scary.

Yes, but radical to the point of blessed, too. As the next section shows.

Be prepared to be blessed at a new level of favour

In the second section of Joshua 5 comes the consequence of this obedience. After the painful ceremony of circumcision, (and a bit of healing time!) comes the second word:

“God said to Joshua, “Today I have rolled away the reproach of Egypt.” That’s why the place is called The Gilgal. It’s still called that.” (5:9)

The Hebrew word Gilgal means “Roll away.” The question is: what is being rolled away? The answer given is: the “reproach of Egypt.” But what does that mean?

The answer is wrapped up in two associated events that happened at Gilgal. The first is the celebration of Passover (v10) and the second is the discontinuation of Manna (v11).

Passover recalled God’s miraculous deliverance of the people of God from the slavery of Egypt. Manna represented God’s miraculous provision of food in the wilderness. And so with two decisive events, there’s a cutting away of the past. The past is being rolled away.

Someone said that it only took a short while to get Israel out of Egypt but forty years to get Egypt out of Israel. It’s like an old smell that lingers, or an old mindset that you get stuck with, no matter what. The reproach of Egypt is the shame of slavery.

In Leviticus 26: 9-13, we get a flavour of what that “rolling away” process looked like:

“I will look on you with favour and make you fruitful and increase your numbers, and I will keep my covenant with you. 10 You will still be eating last year’s harvest when you will have to move it out to make room for the new. 11 I will put my dwelling-place among you, and I will not abhor you. 12 I will walk among you and be your God, and you will be my people. 13 I am the Lord your God, who brought you out of Egypt so that you would no longer be slaves to the Egyptians; I broke the bars of your yoke and enabled you to walk with heads held high.”

It’s an amazing picture of favour: the God who broke the yoke also enables you to walk with heads held high! No slave would walk like that.

The third section of Joshua 5 shows the continuing challenge of obedience:

Be prepared to go on choosing!

13 Now when Joshua was near Jericho, he looked up and saw a man standing in front of him with a drawn sword in his hand. Joshua went up to him and asked, ‘Are you for us or for our enemies?’

14 ‘Neither,’ he replied, ‘but as commander of the army of the Lord I have now come.’ Then Joshua fell face down to the ground in reverence, and asked him, ‘What message does my Lord have for his servant?’

15 The commander of the Lord’s army replied, ‘Take off your sandals, for the place where you are standing is holy.’ And Joshua did so.

It’s a powerful reminder of a crucial point: Who do you serve? You have to decide before the battle begins… And the choice is an ongoing one. You have to choose God every day.

So here’s a few principles of a radical obedience

Prepare to be marked by your decision

Live in the grace of Freedom (and experience His favour)

Choose your Lord and stay in that choice. Keep choosing!

This site uses Akismet to reduce spam. Learn how your comment data is processed.